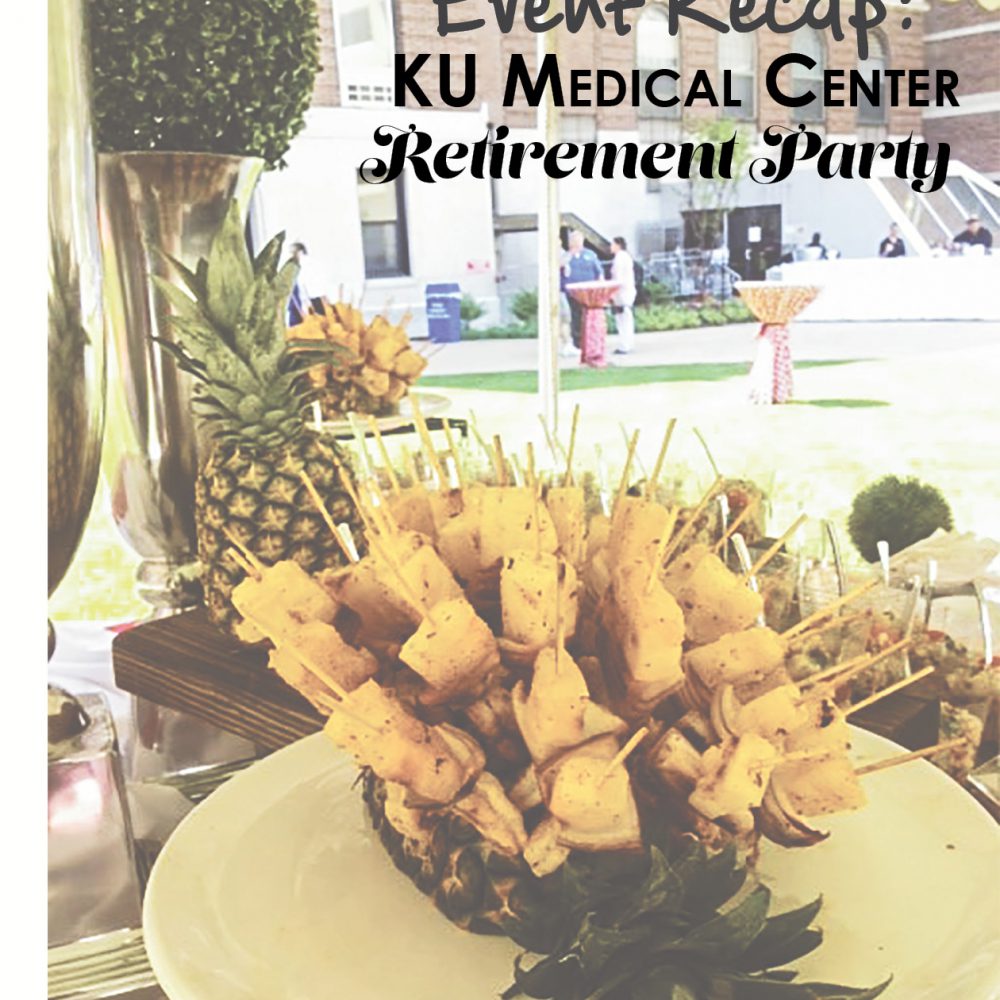 Whenever you are throwing a party honoring a person for professional accomplishments, it is always a challenge to honor who that person is and the contributions they have made. We were tasked with creating a fitting tribute to the honoree that would be upscale and dignified while still being casual and comfortable to fit their personality.

Planning started six weeks out with an initial meeting to discuss plans at which point our team was given the freedom to really create the look and feel of the event. Special considerations were made in the meal as BBQ was a special request, but we also had to fit in items that were nutritious and health conscious. BBQ and healthy are not exactly terms that marry well, but our culinary development team managed to pull it off through fresh seasonal selections in fruits, vegetables and proteins while offering smaller, portable portion sizes for the mingling crowd.  Everyone raved about the bright flavors and unique flavor combinations brought to the table, and were especially impressed with the specially selected beer pairings that fit with each station.

On the rentals side we were tasked with taking the blank slate of the open-air courtyard and transform it into an event venue to fit the upscale but casual BBQ theme carried over with the food. We knew we had to provide seating with shade as there was not much provided naturally in the courtyard. We were able to provide ample seating with shade through the use of our umbrella tables, giving guests the freedom to have a seat, enjoy food but still get up a move around if they wanted.

Speaking of shelter we had to provide shade and structure for the food and the 3-piece zygot band hired by the client. We accommodated this through 20×20 Frame and a 20×40 Frame tents. We also had to provide some sort of flooring under these tents to protect the landscape of the courtyard taking into account the recent onslaught of rain to the area and the amount of foot traffic those locations would experience. To accomplish this we provided a stage for the band and custom-made covered flooring for the food tent.

We were able to carry that BBQ theme through the space with bright pops of color through the use of red and white gingham patterns, bandanas and solid red table coverings on the bar high tables and accents we provided. We were also able to add a bit of fun with the metal troughs and buckets to provide grab and go waters for guests on the warm July afternoon.

Whenever you are planning an outdoor event, there are always challenges to overcome, with this specific event we were challenged with very specific load-in/out times, uncertain weather conditions and temperatures as well as a tight event timeline to stay on-track. We are very proud of how our on-site and office staff handled these opportunities and provided a fun and dignified event to honor a very special person. 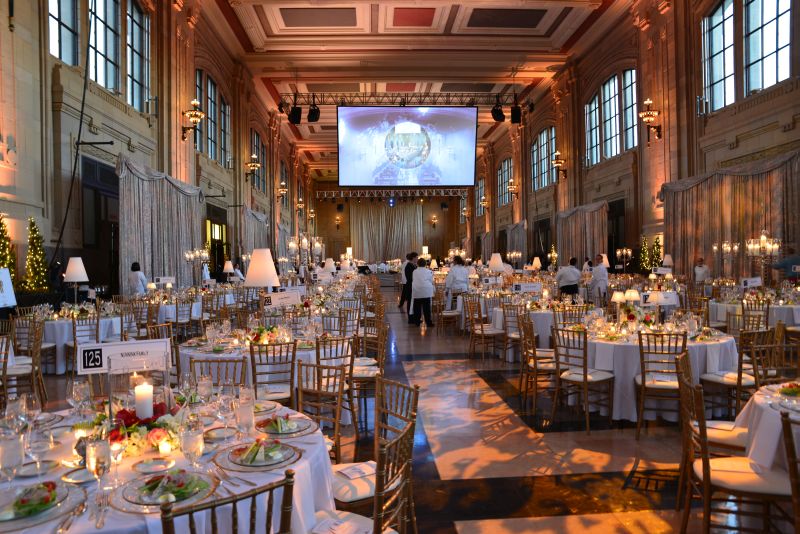 It was with great honor that we were given the opportunity to celebrate 100 years of the most historic landmark in Kansas City, Union Station, an amazing event venue. On Thursday night we had the pleasure and challenge of serving 1520 guests a four course meal. It is such a pleasure to work with the amazing staff at Union Station and a special thanks to George Guastello, Bob Regnier, Jerry Baber, and Michael Haverty for their continued support and passion for the success of Union Station.

Our Team:
An event of this magnitude can not be done without an amazing team. I would like to thank every one of our employees that rose to the challenges of the evening, worked tirelessly, and executed to the highest level.
That evening we had:
10 Chefs
15 Back of House Captains
50 plate up cooks
80 Servers
40 Wine Servers
20 Dinning Room Captains

The Menu:
The vision for the evening was to take diners on a culinary journey through the century that would reflect on the dining experience in the late train stations and rail cars of the 20th century. We spent a countless amount of time studying the archives, various websites, and cookbooks to understand the food of the era. We were able to take concepts and ideas and put a modern twist on them to make them the success they were. We also partnered with Pierponts who handled the appetizer hour and Parisi who handled specialty coffee for the after party.

Balsamic Vinaigrette Dressing
Inspired by recipe of The Pullman Company

We also worked very hard with our sister company, All Seasons Event Rental, to source the tables, chairs, linen, flatware, china, glassware, and custom made drape that made the room look so beautiful. It is always a pleasure to work with Studio Dan Meiners whose team has the ability to transform a space with magnificent floral and centerpiece concepts.
The room was truly classic and elegant!

The night was also shared by speeches from Michael Haverty, Don Hall Jr., George Guastello, and an amazing performance from Joyce DiDonato.

I would like to give a special thank you to Stacey Price, Facility Rental and Event Manager for Union Station. Without her expertise and dedication to the overall success of the event and quarterbacking all of the vendors for the evening this evening would not have been what it was.

Last week I had the opportunity to travel to Atlanta for a conference called “The Art of Catering Food.” This was my second time attending the conference. Both times I have been to this conference I have strengthened my relationships with other industry leading caterers across the country, gathered new ideas, and refreshed my initiatives to continue to always strive to be the best. This year I selected a key member of our catering operations team to attend the conference with me. Continuing to develop the talented team we have here has been a key focus of ours and has aided in our ability to grow and develop as a company. I felt as though this individual learned valuable new skills with regards to food preparation, presentation, and tricks of the trade that he will be able to translate to the rest of the team as we enter the second half of the year.

I was told two weeks ago by an influential client that “The true mark of a great company is when its staff cares about what they are doing, and you obviously have a great company, because your staff cares, and it shows.” Attending trade shows and constantly pursuing new and better ways is what has led us to the success we have now and is what will continue to drive future success. I always enjoy the opportunity I get to learn from other industry experts and especially when I am able to continue the development of those who have made an impact and will continue to make an impact. I would like to thank my staff, all of them, for all they do to make our company GREAT!

Kansas City hosts several events throughout the year with many of them starting Memorial Day weekend and continuing throughout the summer. We believe that we can enhance these events and help them become more successful by contributing with great food, drinks and service. Over the past few years Brancato’s has worked to expand the concession portion of our business. We create extensive proposals and layouts in hopes to become a part of these great events. In addition to our bids we house top industry equipment and expert coordinators to execute these events to their fullest.

The first one being the NHRA Drag Races at Heartland Park Topeka. This 3 day event brings in thousands of spectators to witness these top speed races. We utilize all kinds of equipment to carry out this event including several tents, refrigerated trailers, storage containers, mobile kitchen equipment and our recent addition of our mobile production kitchens.

Other logistics coinciding with most of these concession events include coordinating inventory, vendors, labor (staffing upwards of 300 employees), transportation and lodging. I personally assist with the staffing on several of these events and it is important to build the correct amount of points of sale and back of house help to make sure we are putting out great product, keeping concession lines down and maintaining overall low labor costs to uphold our bottom line.

The 2nd event was Celebration at the Station by the Kansas City Symphony, which is the largest free Memorial Day weekend event in the Midwest. We supply concession drinks for this event and coordinate many local food trucks to come and set up around Union Station to offer their food.

The third event was Rockfest at Liberty Memorial. This event is the largest one-day rock music festival in the United States. We set up our concessions and sell liquor, soda and bottled water for this event. The event draws 55,000 rock music fans that consume over 75,000 cans of beer.

The next event we will be a part of is Symphony in the Flint Hills, Saturday June 14th!

We hope to see you there!

This picture is all of the lunch suite parties we do in 1 day at Heartland Park Topeka! 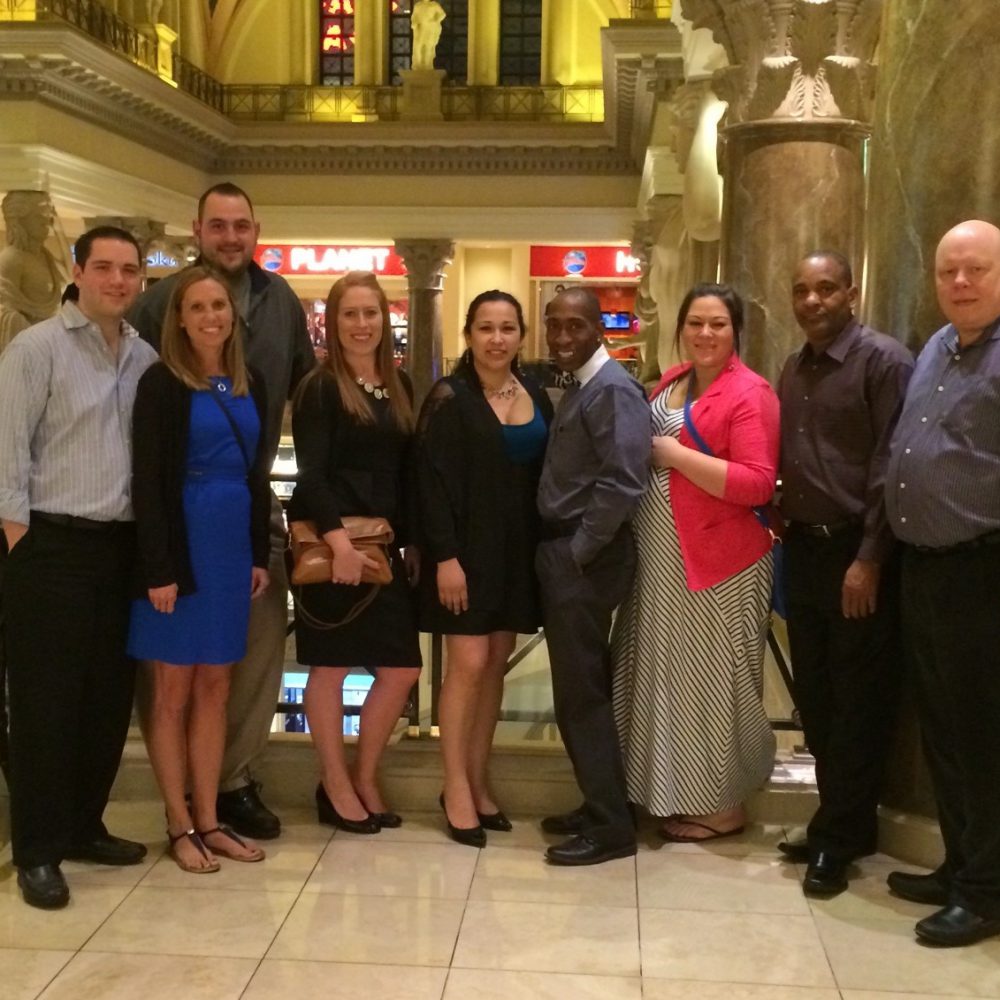 Each year our owners pick a team from our staff to head to Vegas to attend the Catersource and Event Solutions conference and trade show. It is a great educational opportunity for our staff and we can walk away with winning strategies, tools, new ideas and techniques and the latest trends in the industry. The information we obtain from this conference allows us to provide our clients with top service in the industry.

The conference offers interactive experience stages where demonstrations by top chefs in the country show us the newest in culinary techniques and food ideas. In addition to the classes offered the conference also includes a tradeshow with hundreds of exhibitors ready to show us the latest in event ideas, products and services for the industry. It gives us an opportunity to meet with vendors face to face to discover new suppliers and equipment to better our business.

From business to operations to sales and marketing the ideas, skills & connections acquired from this conference have a positive impact throughout the year. We look forward to showing you what we have learned by making your event and experience with our company one that is truly memorable! 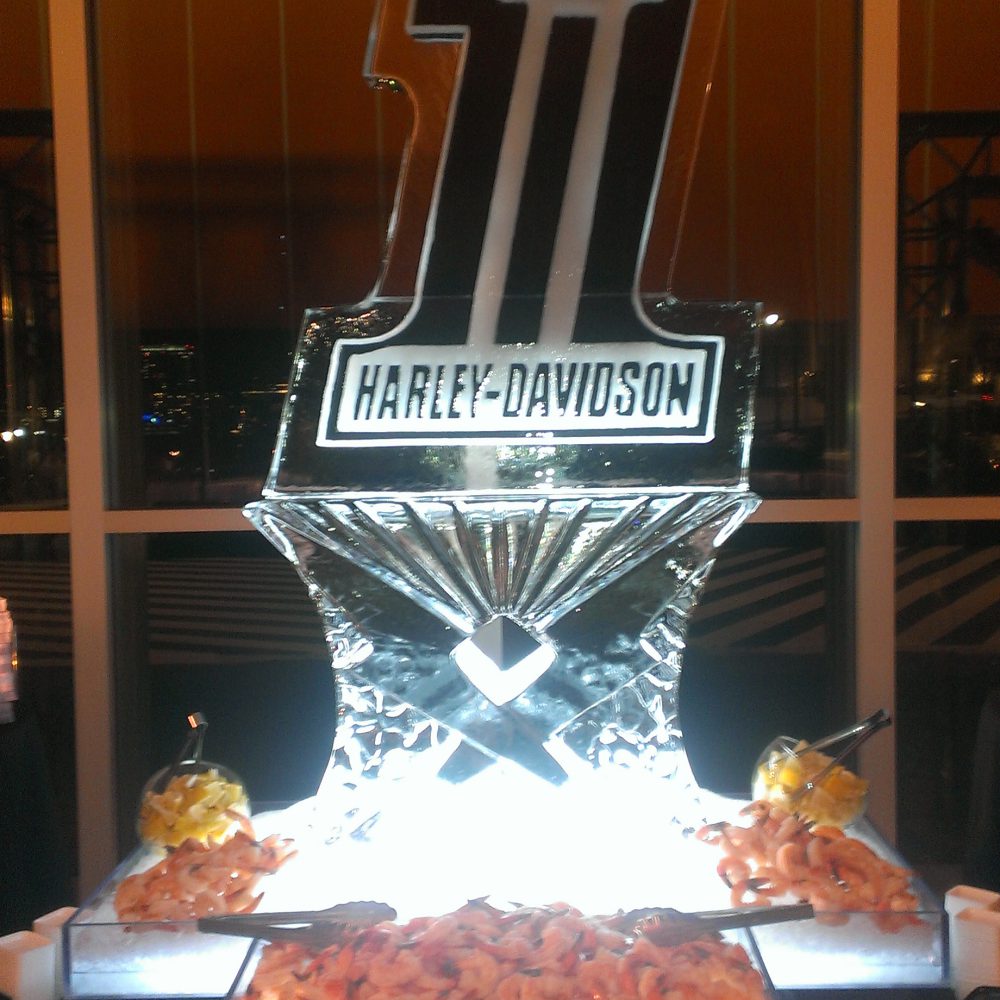 We had an exciting opportunity to be a part of Harley Davidson’s product launch event. We provided a station style reception for 900 and lunch the next day for 500.

Here is the menu and some photos:

Being able to be a part of so many different types of events is one of the things that I love most about this job. We deal with such a wide range of customers, events, and budgets, but all of them are equally as important to us.